The end of the videotape player

Anyone over the age of 25 probably remembers the days of the tape; taping your favourite programme, buying a tape to watch your favourite film, or perhaps even recording your own life onto a tape via one of those huge video cameras!

That’s right, it’s hard to believe that those chunky black video tapes were a common feature of households across the world during the 1980s and ‘90s, but if you’re hoping to watch your treasured videos later down the line, you may want to check your videocassette recorder (VCR) still works.

Why? Because Japan-based Funai Electric has announced it will stop making the devices this month, marking the end of a milestone for videocassette recorders.

The history of the VCR

It’s safe to say that the cassette tape revolutionised the television and film industry from the 1950s.

The first ever prototype for a tape recording video was demonstrated by Bing Crosby Enterprises in 1951 and the idea was later developed by the Ampex Company, which created the first videocassette recorder in 1956.

It wasn’t until the late 60’s and early 70’s when Sony launched the first commercially-marketed tape recorder. By the late 1980s, competition had stepped up and tapes were becoming affordable for all. A new era was born; people could record their favourite films and TV shows and re-watch them whenever they wanted.

Fast forward to 2016 and the videotape seems like a distant memory (although less distant than the minidisc!). Many have probably been thrown out, or tucked away in a long-forgotten box gathering dust somewhere.

Today, advances in technology mean people can record their favourite film or big match at the press of button; no need to stop and change the tape over!

Even DVDs are gradually being outshone by online-streaming.

So, if you’re hoping to watch that treasured family movie in years to come, unless you’ve taken good care of your videocassette player, you may want to invest in one now. 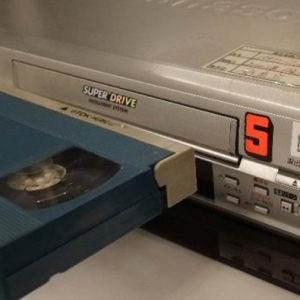 0 0 0 0
Previous ArticleWhat a beautiful place for a wedding
Next ArticleIs there life on Mars? No, but there could be elsewhere
Comments (0)